Nearly a year ago, I posted the beginning of a quick pants short story, and then I completely forgot about it.Â I rediscovered it during Toddler nap time yesterday, and so I added a little bit more to it. The original posting of the story is here, but for convenience, I’m re-posting the beginning of this short story here as well.

As usual, I invite you to let me know what you think! Comments appreciated.

She was the silent type. It would have been an awesome and somewhat mystical trait if she had also been strong, but she wasn’t. Not yet.

For years, Alissa had been perfectly fine flying solo, and after that disastrous train wreck that she’d mistakenly called a relationship with Dax, being alone had been a good thing. She needed to heal; she was determined to remember to love herself before she tried loving anyone else.

Besides, she knew that when the time was right, her feelings and intuition would give her the courage to take action and move forward. Today, Ali knew that the time had come.

Squaring her shoulders and taking a deep breath, she held her head high as she advanced upon her target. This guy didn’t know it, but a serendipitous hurricane was heading his way.

He felt her presence before he saw her. Nick had already memorized her features from her profile picture, so he took his time before looking up from the glare of his computer screen. He just barely resisted the urge to adjust the frame of his glasses with his thumb. Reviewing facts always calmed his nerves, so he ran through the shortlist of everything he thought he knew about her.

Her name was Ali, she was a junior, and she had long jet black hair (thanks to two $5 dye kits from the store, she’d confessed), and apparently had shapely legs that went on for miles and miles down to impatiently tapping feet that had an at-home, slightly rushed looking pedicure. Well, the last facts had been observations in real time.

Nick cleared his throat and willed his heart to stop beating in his ears like an obnoxious drum. During one of their late-night chats Ali warned him that she was a mess; yet even after he’d confessed his own shortcomings to her, she’d still been willing to show up at this random hipster cafe to actually meet him in person. She’d given him a chance, and he was already half in love with her for that small miracle alone.

He just hoped like hell he wouldn’t blow it.

I recognized him before I even saw his face. Hunched over a laptop, his back was toward the front entrance of the cafe. Since he was the one who proposed meeting here in the first place, I was a little confused. It had taken all of my strength to gather enough courage to show up in the first place, and now heâ€™s placing me in the position of risking possible humiliation by approaching a complete stranger like Iâ€™m desperate or something. Far from it â€” I know my worth.

The familiar burn of sudden rage churned in my stomach, threatening to erupt in the form of bile. Wait a second, Ali, I reassured myself. Itâ€™s Nick. Heâ€™s not one of them. Give him a chance. These days, being my own voice of reason was my only saving grace.Â

As I stood near the door of the coffee shop, I took a deep breath and weighed my options. He hadnâ€™t turned around, so I could still back away and escape before he even noticed that I had come. Weâ€™d both given each other a way out in case either one of us lost our nerve; maybe this was his method.Â

Taking advantage of the slightly crowded, yet still cozy coffee shop, I perched on a wooden bar stool and pretended to study theÂ  gigantic menu ahead of me on the left wall. Nick was seated near the back of the shop, apparently in a designated quiet area. A vacant brown pleather seat next to his caught my attention. A sapphire-blue scarf with appliquÃ©d peacock feathers was carefully draped over one of the arms of the well-worn chair, a clear indication that the seat had been reserved for someone. An involuntary gasp escaped from my throat. That was the present that I had made for him after his grandmother died a few months ago. He swore to me up and down that everywhere he went, that scarf went, too. I was certain that he was exaggerating, attempting to flatter me, until now. Even from my safe distance I could see that the scarf truly had been well-worn. Iâ€™ll have to make another one for him, I vowed.Â

Taking my time, I studied what I could gather of his physique. He definitely had stringy, chestnut brown hair that he had warned me about; it was a bit longer than I personally preferred, but it was his head, so I guessed that he was pleased with the length going slightly past his neck. I had expected him to be a super tall string bean kind of guy, but from what I could tell from my pseudo-hidden position, he seemed to be of average height, about 5â€™9 or so. His shoulders were more broad than I had anticipated, and a flutter of surprised attraction swirled in my belly. I knew that he worked out because of his older brother, but I have to admit that I hadnâ€™t expected that it would be so, well,Â obvious.Â

The realization that Nick could actually be an attractive guy suddenly made me nervous. I know that this sounds snobbish, but I was kind of expecting him to not be the hottest guy in the world. Actually, the way he described himself, he almost made Quasimodo sound handsome. I knew that he had self-esteem issues â€” donâ€™t we all â€” but to a certain extent, when he had described himself in such a negative fashion, I believed him.

His back suddenly straightened, as though a chill had clutched him by the shoulders and pulled him to attention. It was strange; in that very instant, I knew that he had finally sensed my presence. Still, he didnâ€™t turn around; instead, he adjusted his computer screen, obviously relying on its reflection to reveal my actual location to him. Coward.Â

Quickly tiring of the Cat and Mouse game, I stood up, straightened my purple and black skirt and blouse, slung my thick braided hair behind me, and walked straight towards him.Â

Oh crap. I knew that I was in trouble the second I heard the barista address Ali as she floated by the counter, beelining in my direction.

â€œMay I help you?â€ The perky barista practically look ready to jump over the counter and give out free hugs to all customers. Ali barely glanced at her as she maintained her pace.

â€œNo, I can help myself. If I need anything, Iâ€™ll let you know, thank you.â€

The succinct, clipped tones emanated from a voice that reminded me of indulging in one of Grandmaâ€™s honeyed biscuits on a Sunday morning. Sweet, savory, buttery, and hot all at the same time. Who was this woman? And why the hell was she still showing interest in a throwaway like me?

*The Next Installment of Ali & Nick’s story continues here!

I can’t wait to find out what happens next! Be on the lookout for my next installment (sooner rather than later).

Â©Atina AtwoodÂ 2018 Exploring Love and Life, One Word At A Time

â€“ Atina Atwood is a southern girl who moved from Europe to the West Coast. A former university professor in Germany and California, Atina stepped away from Academia to focus on her miracle child, life, love, food, quilting, and of course, Romance. Follow her onÂ Twitter,Â Facebook, andÂ PinterestÂ for more. 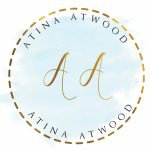